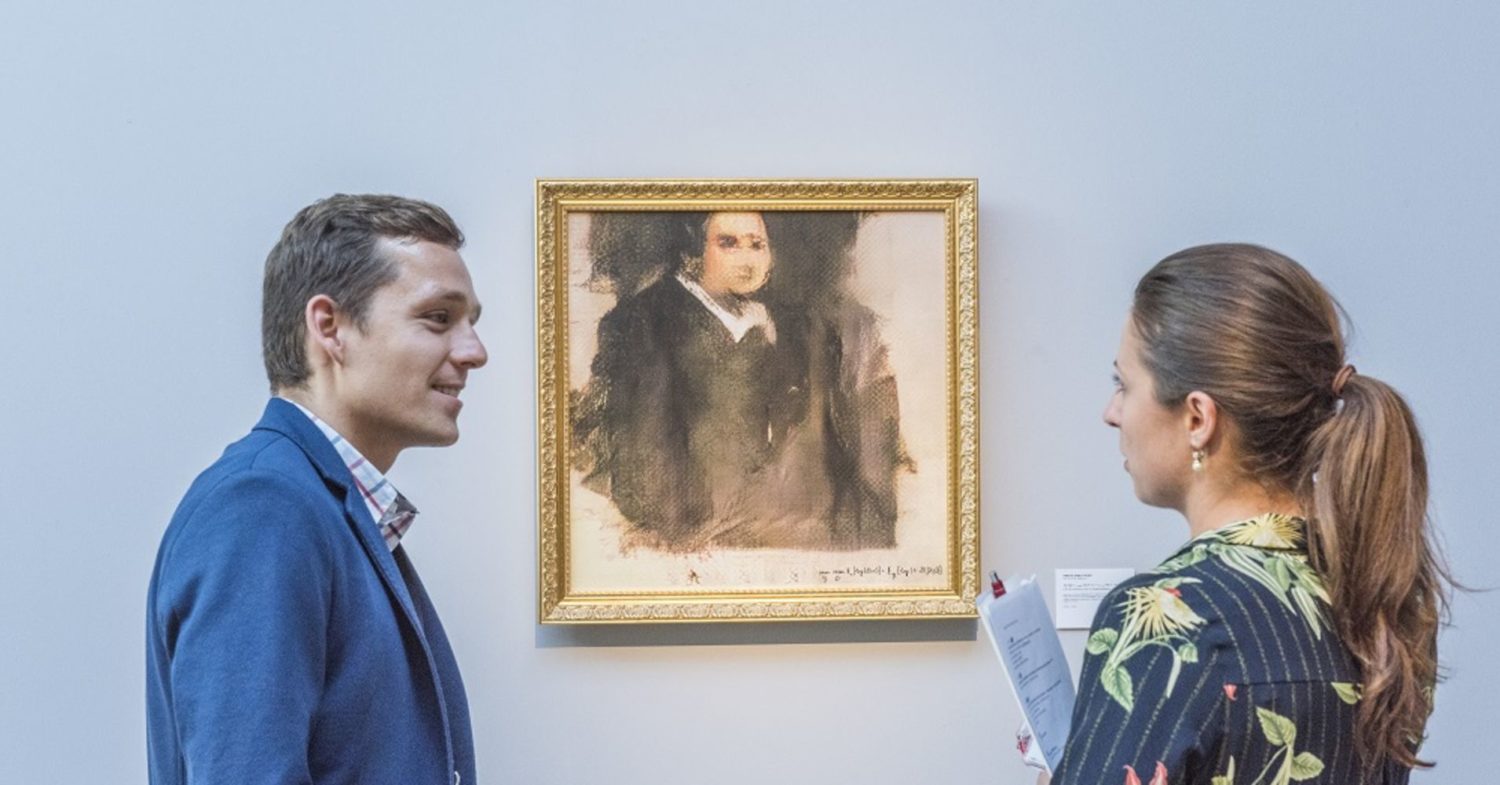 On October 25th, Christie’s will conduct a very unusual sale. As part of a three-day Prints & Multiples event, it’s auctioning offthe Portrait of Edmond Belamy, a canvas in a gold frame that shows the smudged figure of what looks like an 18th century gentleman. It’s expected to fetch a modest price, somewhere between US$7,000 and US$10,000, but the artwork’s distinguishing feature is that it was “created by an artificial intelligence,” says Christie’s.

“And when it goes under the hammer, [it] will signal the arrival of AI art on the world auction stage.”

For members of the burgeoning AI art community, there’s another attribute that sets the Portrait of Edmond Belamy apart: it’s a knock-off.

The print was created by Obvious, a trio of 25-year-old French students whose goal is to “explain and democratize” AI through art. Over the past year, they’ve made a series of portraits depicting members of the fictional Belamy family, amplifying their work through attention-grabbing press releases. But insiders say the code used to generate these prints is mostly the work of another artist and programmer: 19-year-old Robbie Barrat, a recent high school graduate who shared his algorithms online via an open-source license.

The members of Obvious don’t deny that they borrowed substantially from Barrat’s code, but until recently, they didn’t publicize that fact either. This has created unease for some members of the AI art community, which is open and collaborative and taking its first steps into mainstream attention. Seeing an AI portrait on sale at Christie’s is a milestone that elevates the entire community, but has this event been hijacked by outsiders?

Whose Code Is It Anyway?

To understand the concerns about attribution and expertise that have cast a shadow on the Belamy auction, you need to know a little about the tools used in the AI art world. The most important of these is the generative adversarial network (GAN), a type of algorithm first designed by Ian Goodfellow, a researcher now working at Google. The name “Belamy,” chosen by Obvious, is a tribute to him; it’s a translated pun from the French “bel ami” meaning “good friend.”

Goodfellow’s work on GAN is the stuff of AI legend. The story goes that over a few beers with friends one night in 2014, he posed the simple question: what if neural networks could compete with one another?

The basic idea of a GAN is that you train a network to look for patterns in a specific dataset (like pictures of kitchen or 18th century portraits) and get it to generate copies. Then, a second network called a discriminator judges its work, and if it can spot the difference between the originals and the new sample, it sends it back. The first network then tweaks its data and tries to sneak it past the discriminator again. It repeats this until the generator network is creating passable fakes. Think of it like a bouncer at a club: sending your drunk friend away until they act sober enough to get in. 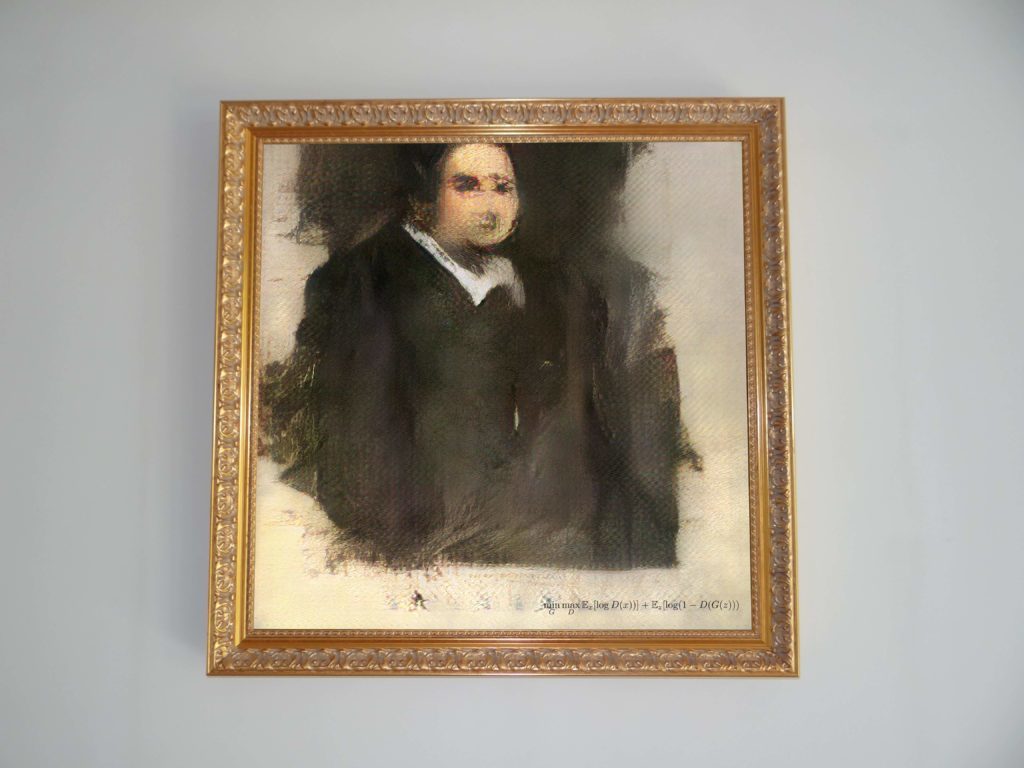 This basic concept of dueling networks proved to be immensely powerful, and GANs are now a cornerstone of contemporary machine learning. They’ve been particularly fruitful in the AI art world, and pictures created using GANs have a distinct aesthetic that reflects how the algorithms process information. The networks know how to copy basic visual patterns, but they don’t have a clue how they fit together. The result is imagery in which boundaries are indistinct, figures melt into one another, and rules of anatomy go out the window. This aesthetic even has a tentative name, proposed by Google AI engineer François Chollet: GANism.

Barrat has been a leading light in the world of GAN art, generating headlines with his surreal nudes and landscapes. He also shares the algorithms he uses to create these images on GitHub, helping fellow artist-coders to get the neural networks up and running. This is how Hugo Caselles-Dupré, the tech lead for Obvious and a machine learning PhD student in Paris, found Barrat’s algorithms and used them to generate the Belamy portraits.

Exactly how much of the work can be credited to Barrat or Obvious is a difficult question. Generating images using GANs is a multistep process. First, you collect training data with a “scraper” that your network will replicate. Then, you construct the generative algorithm, which is the most time-consuming and difficult part. Next, you start running the algorithm and sort through its output, picking the best examples from the hundreds or thousands generated.

Speaking to The Verge, Caselles-Dupré readily admits that Obvious borrowed elements from Barrat (like the “scraper” used to collect images), but he says they tweaked the code to produce their portraits to their own liking. “If you’re just talking about the code, then there is not a big percentage that has been modified,” says Caselles-Dupré. “But if you talk about working on the computer, making it work, there is a lot of effort there.” (Some of that effort seems to have involved bugging Barrat. In discussions on GitHub, you can see Caselles-Dupré, alias Caselles, asking Barrat to make changes to his code.)

Barrat tells The Verge that Obvious approached him and asked to use a “component” of his code. After that, he says, they “almost immediately started producing work identical to the outputs of the pre-trained portrait and landscape networks” he hosted on GitHub.

Other members of the AI art community say whatever changes Obvious made must be minor. Mario Klingemann, a German artist who has won awards for his own work with GANs, tells The Verge over email, “You could argue that probably 90 percent of the actual ‘work’ was done by [Barrat].” Tom White, an academic and AI artist from New Zealand, says the work is extremely similar, even downloading Barrat’s code and running it with zero adjustments to compare the outputs.

The results below come from White’s experiments, and as he tells The Verge:

“Though I can’t prove that the portrait up for auction is derived from Robbie’s portrait GAN model, it certainly looks suspiciously close to images that this model is capable of producing.”

But to what extent does borrowed code even matter? The creative world is full of examples of appropriation, from sampling in hip-hop to Marcel Duchamp’s readymades. And Obvious has certainly conferred a new status on their portrait by presenting it as traditional art. They’ve hung it in a gold frame and signed it using a segment of the algorithm’s code: “min G max D x [log (D(x))] + z [log(1 – D (G(z)))]”. As Klingemann notes, “I wonder why they missed the opportunity to declare their work as an AI-readymade and bring us the first digital Duchamp.”

The AI Did It

Given this, it might seem unusual that the Belamy portrait was chosen by Christie’s at all. But part of the reason for the Obvious’ prominence has been their willingness to embrace a particular narrative about AI art, one in which they credit the algorithm for creating their work.

In press materials that the trio sent out at the beginning of the year, they led with this message: their motto has been “creativity isn’t only for humans.” A press release from January told reporters, “An artificial intelligence managed to create art.” Soon after this, they sold their first portrait to a French collector, and articles covering the news repeated the claim that the print was “created by artificial intelligence.”

For AI researchers and artists, this is misleading. It gives readers the false impression that machine learning systems are more complex and autonomous than they actually are. “It’s the kind of thing you might say when you’re anonymous or you don’t think anyone’s listening,” says Bailey. Although the question of to what degree algorithms are tools (as opposed to active collaborators) is discussed at length by artist-coders, they are certainly not self-directing agents. “Anyone who has worked with AI and art realizes [this],” says Barrat. Media narratives focused on out-of-control AI and “robots” replacing human works, often ignore these nuances, however.

Obvious blames journalists for this sort of coverage, but they also regret the language they used in early blog posts and press releases, saying they did so only to grab attention and provoke discussion. “When we sent those we were on our couch thinking ‘Hey, how can we get to these guys?’ because we sent messages and got no answers and we wanted to have a discussion,” says Caselles-Dupré. “We tried many stupid things and we totally admit it.”

Christie’s has certainly been willing to buy into this message. The company approached Obvious this past summer, and it has since presented the auction as a provocative gesture that refreshes the company’s brand and stakes its claim in any lucrative new art market. “It may not have been painted by a man in a powdered wig, but it is exactly the kind of artwork we have been selling for 250 years,” said Christie’s specialist Richard Lloyd in a post on the company’s site.

In this sense, the auction is already a grand success, turning heads and generating press coverage around the world. In turn, it’s conferred on Obvious the sort of credibility that comes with an endorsement from an institution that previously sold the world’s most expensive painting (Leonardo da Vinci’s Salvator Mundi for $450 million). 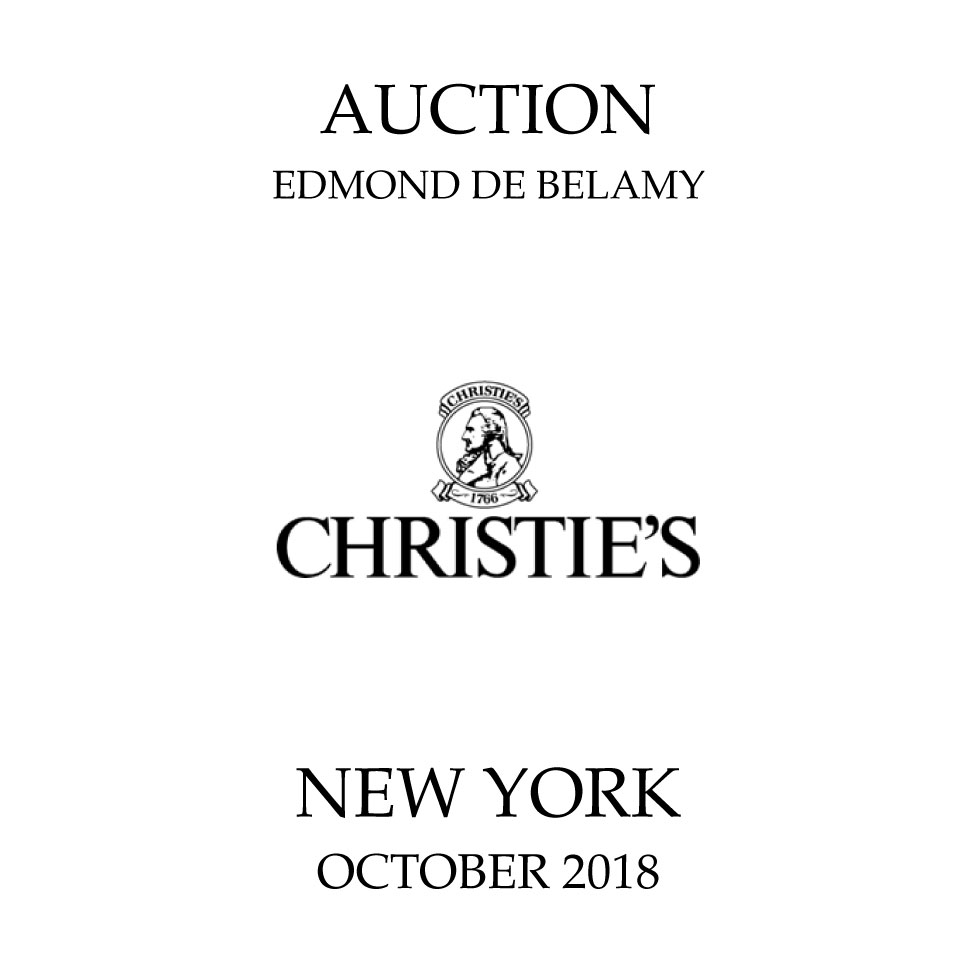 What might be the most interesting thing about the Belamy auction is that, with not much more than some borrowed code, an inkjet printer, and some enthusiastic press releases, a trio of students with minimal backgrounds in machine learning ended up at the center of a milestone in art history.

“People are quick to paint others as heroes or villains, and they say because [Obvious] didn’t do the work they must be horrible, but there’s another story,” says Bailey. “Three 25-year-olds wanted to do something entrepreneurial and startup-y. They saw that AI was getting a lot of attention” and grabbed some code. “None of those things make someone a bad person per se. They didn’t know it was going to blow up to the point that it would be at Christie’s.”

Caselles-Dupré certainly still seems to be in shock from the turn of events. “We are just really, really, really surprised,” he says, adding that it’s a “relief” to be able to tell the full story. “For us, the best-case scenario was that we’d get one or two articles, sell some pieces, get some money, and do another project.” Instead, they’re flying to New York to put AI art on the map. Hopefully, they won’t be the last. 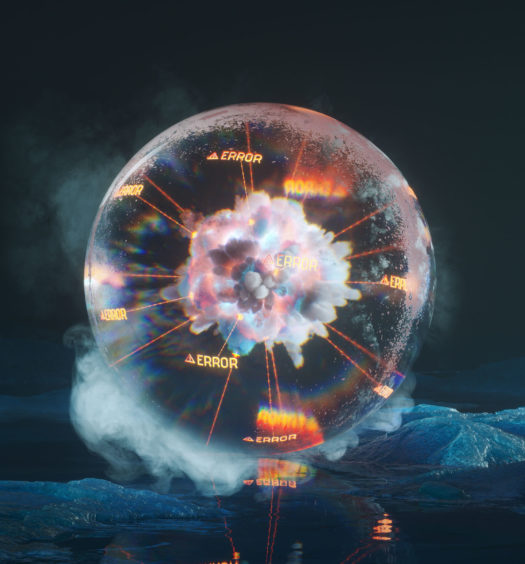 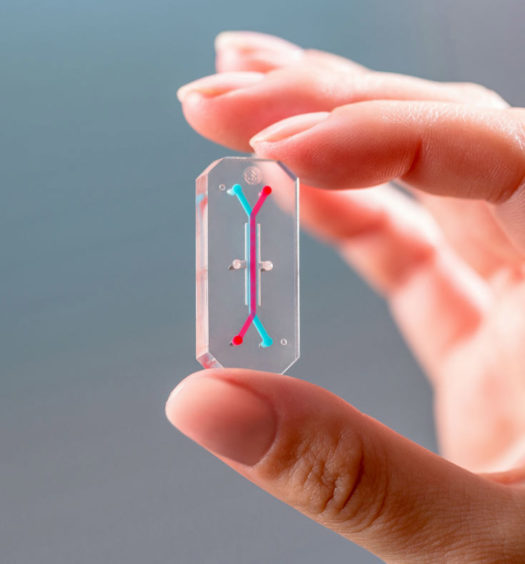 At Amgen, Data Scientists Partner with Life Scientists to Build a Better Bi...